Libel, slander and defamation. What does it all mean and what’s the correct terminology?

A statement cannot be defamatory unless it has caused or is likely to cause ‘SERIOUS HARM’ to a claimant’s reputation according to the Defamation Act 2013.

Slander is for spoken or ‘intransient’ statements that are defamatory and identify the subject and have been published. You can also be sued for slander, although this is much harder to prove because it is likely there is no record of it. 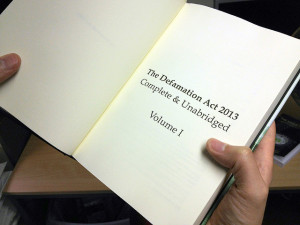 Libel is for written publications and broadcasted material (so covers virtually all newspapers, TV and radio stations. Libel is what people would sue you for, not defamation.

Libel = Defamation (a defamatory statement) + Identification (of the subject) + Publication

In law, identification is determined by whether people acquainted with claimant could reasonable to believe that he/she was the person referred to in defamatory statement. It is therefore important to put as much information about a person as possible. Otherwise, someone else who could be accidentally assumed to be the person being written about could sue.

It is also important to know that if a defamatory statement refers to a member of a group and includes no other details of identification, all members of that group (so long as it is sufficiently small enough) could sue for defamation.

For example, if you wrote “an officer at our students’ union is dishonest and unethical” and did not refer give any more detail about the person, all officers at the union could sue because they could all be believed to be the person the statement referred to.

However, if you wrote “students at universities in the UK are lazy and cheat in their exams” there would be no case of libel because the group referred to is not small enough for it to be believed that the article referred to a particular student.

It is also important not to imply habitual conduct. If you describe someone as a murderer you might be suggesting that they murder people all the time. One conviction does not make someone a career criminal.

Libel action can be pursued by not only to individual members of society, but also to companies (although not to government bodies or trade unions.)

As a student journalist, the only defences you are likely to be able to use for libel cases are:

You must feel confident you could prove in a court of law that the defamatory statement was true.

If you are writing a comment/analysis piece you are safe from libel action, so long as you make it obvious that the content is an opinion, the statement is not made with malice, and the opinion is actually held by the person making the claim.

The information can reported without fear of libel action if it is covered by absolute privilege (statement was made in a court of law or by an MP in parliament) or qualified privilege (the statement was made at a public meeting, public inquiry, by a government department, local authority or the police.)

You must feel confident you could prove in a court of law that the claimant agreed the material could be published.