A fantastic news story by Cecily Morgan about the money that Warwick University has been granted for improving healthcare in some of the world’s poorest countries. Well worth a read!

“The University of Warwick has been granted £7 million by the National Institute for Health Research towards improving healthcare in some of the world’s poorest countries.”

The University of East Anglia’s newspaper, Concrete, have a cracking article about the students’ union using photos of students on promotional material. Make sure you check this one out:

“Students claimed their images were used without permission and words falsely attributed to them in advertisements for the SU’s Societies’ Fayre in welcome week.”

Of course you can never go wrong with writing a story about student accommodation! Readers love to find out more about whether they get good value for money or not and to see how their halls of residence compares to others. Cue an article by Nouse’s Oscar Bentley:”Langwith, James, and Derwent have all appeared in the top 30 student halls in the UK in a recent study detailed in an article by Times Higher Education. This follows the University of York appearing 23rd in the Times Student Experience Survey 2017, where York achieved an overall score of 79.7, although lagged behind in some critical areas.”

Exposé have got an interview with Dunola Oladapo… don’t know who that is? Well, that’s the whole point of this feature! A brilliant long read that draws attention to a lesser known international summit:

“The G20 conference attracts international attention and debate each year as world leaders, economists and academics meet to discuss global issues. What a lot of people don’t know about however, is that the G(irls)20 conference meets several weeks before the G20, where young women from each of the represented countries discuss and debate advice and proposals for the world leaders to consider during the summit.”

Lifestyle articles are very important. Sometimes people forget about them because they’re often tucked away in the middle of the paper but they often report on aspects of student life that people genuinely care about. And the relationship between being a student and alcohol always attracts attention. Give this article a read:

“For most students, drinking alcohol and taking drugs is an obligatory staple of the university lifestyle. So much so, in fact, that it’s impossible for many of us to consider a life without intoxication.” 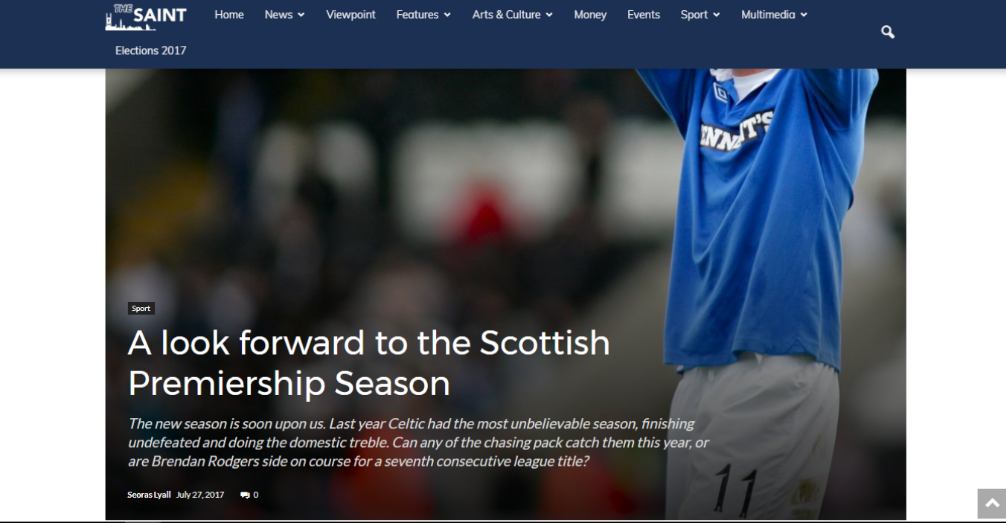 Now, I don’t know about you guys but I am desperate for the football season to start again! Just one week to go now! Seoras Lyall from The Saint has written a neat round-up of this year’s Scottish Premiership teams and what they’ve been up to over the summer transfer window:

“The new season is soon upon us. Last year Celtic had the most unbelievable season, finishing undefeated and doing the domestic treble. Can any of the chasing pack catch them this year, or are Brendan Rodgers side on course for a seventh consecutive league title?”