This week, we’ve got some great articles on student campaigns, and an excellent idea for covering NUS referendums… 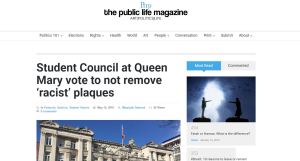 Pmp have the details on the failed campaign to have a plaque commemorating the colonialist Belgian monarch, King Leopold, removed. Following on from the controversial Rhodes Must Fall campaign, the Queen Mary Pan-African Society initiated a similar campaign regarding the “genocidal” Leopold’s relationship with QMU.

The Boar have a great couple of articles, one arguing for Warwick staying with the NUS, one arguing against staying. With such a febrile atmosphere surrounding the NUS and similar referendums elsewhere, having the issue argued from both sides is a great way of helping students make up their mind.

Wessex Scene, the University of Southampton

University finances in terms of how much each institution pays their Vice Chancellor is ground well-trodden. Less well-explored territory is the massive amounts of capital universities hold; in terms of land and also shares. Wessex Scene have a great article covering how Southampton Uni is investing in much more ethical industries than previously, following student pressure.

Apologies that this one is a bit short, and it’s not SPA Front Pages as promised. I think I’ve passed through 90% of the counties in England this week so it’s been a bit challenging to put all this together, but I promise a much better effort next week!

But if you want to make it easier for me, feel free to send any articles you publish in the next week to communciations@spajournalism.com and I’ll write them in 🙂