3:45am on Thursday morning came with a stark realisation that I was actually heading to The Times newspaper in London. As a journalism student I am always reading, listening and watching what’s going on in the world. One of the first national newspapers I picked up was The Times, for many reasons. That’s why when the buzz of my alarm went off I was excited. I’m usually slow and steady in my morning routine – but when 5:15am came I was out of the door quickly, ready for the first train at 5:40am to take me to London Kings Cross.

9:06am came in a blur. A nap on the train at 7.00am had calmed my nerves a little, but I woke up (for the second time) to a delightful message from one of my lecturers wishing me luck on my trip to The Times. I quickly zipped into Starbucks for a hot chocolate – and to my surprise they wrote my name on my cup. 9:25am was fast approaching so I jumped into the taxi queue.

9:30am and I was on my way to the News UK building which is near London Bridge. But minutes later I was faced with a London traffic jam. We sailed through twists and turns of back streets before finally making it to the building – and by golly it was HUGE! At that moment it sunk in – I was at The Times of London, but I quickly forgot about the latter part as I was made to feel right at home by reception.

10:20am was filled with a short security stop and then it was up in the lift to floor 11. As soon as I walked through the glass doors into the Times newsroom – I couldn’t help but feel in awe of the office. It was big in comparison to my student publication’s MediaHUB which houses five platforms. 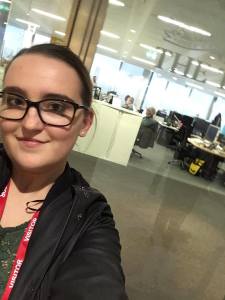 Elliot Davies, the newsroom developer I was shadowing throughout the day, gave me a quick tour of the different departments and then we sat down to discuss his role at the publication. Elliot’s job is to help journalists figure out the best ways to tell stories through interactive graphics and online tools. He also builds tools for journalists to use. Essentially he bridges the gap between software developers and journalists – a handy job in the digitally focused world of journalism.

At 11am it was time to head to the Times’ morning conference where they discuss what’s going into the paper as well as on the website at different times of the day. At university we have something similar when we are taking part in our news days, but experiencing a national morning conference is very different. I was in the same room as the editor of The Times after all!

After meeting the rest of the team, it was time to head to work looking at the tools Elliot and his co-workers use and build. While I can’t say too much, it was fascinating to see how journalists and coders can work together. I’m currently learning HTML and CSS – albeit I’m only in the infant stages, but it was exciting to see the code being put together.

Next up was lunch time. The lunch room was something else to behold – not only filled with food and drink, but filled with the London skyline – a sight you’ll have to see for yourself to do it justice. It was mesmerising. We had lunch with a journalist from The Sun newspaper and with someone from the social media team at The Times. It all just felt normal by that point – being at The Times didn’t wear off though!

In the early afternoon, after a chicken mayonnaise sandwich and a cup of tea, Elliot gave me the chance to shadow other journalists in the newsroom. I was able to meet some of the social media team. They’re formally called the audience development team. I learnt a lot from this experience as I was able to explore SEO – search engine optimisation, learn about social media optimisation and organic sharing and look at how The Times use their social media to engage their audience. Very insightful stuff!

I then got the opportunity to look at coding from the back end of The Times and tried to problem solve why a piece of code wasn’t working on the front end. Elliot figured it out and I got to see it change on the piece of software he was working on.

At approximately 4:45 I was able to shadow a SEO meeting for the new Good University Guide that the Sunday Times brings out every year – which was also very interesting. It meant I got to take a trip to the Sunday Times’ office. 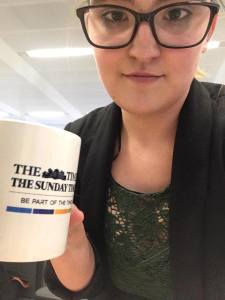 At 6pm it was a sign that I had to depart The Times and head home. After a couple of failed selfies with a Times mug – and one successful one, I said goodbye to the office. With one last selfie under my belt (a picture of me at the glass doors hastily taken before the lift doors closed), I walked out of the building feeling very lucky. I didn’t cry – it was the rain – I promise!

As I got back to London Kings Cross at 7pm I couldn’t help but smile – my time at The Times was amazing and the ideas I have are a sign of what’s to come in the digital world – lots of coding, capturing what our audience thinks and more importantly chasing dreams.

NB: I arrived home at 11:30pm, but the long hours awake were worth it. Thank you to the SPA for the opportunity.